Are you a patient wanting to take a ‘quantum leap’ in your healing?

The Myofascial Healing Seminar has been created for patients, family members, and Therapists who are all wanting to learn how to further enhance their healing. I was thrilled to share my love for MFR snd beautiful Sedona with my son in June ’09.  Click on this link to learn how you can attend a Myofascial Healing Seminar for Patients and Therapist. 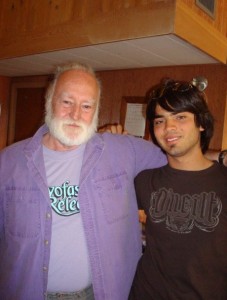 “John F. Barnes, PT has been treating patients since 1960 and is the owner, director and chief physical therapist of the Myofascial Release Treatment Centers in Paoli, Pennsylvania and Therapy on the Rocks in Sedona, Arizona.

John was named one of the most influential persons in the therapeutic profession in the last century, in the national Massage Magazine’s featured article titled “Stars of the Century.”

Signup to Get Free Updates

Contact us to learn about achieving optimal wellness with Myofascial Release

We'll never sell your email address and you'll never receive spam from us.

What is Myofascial Release?

Over 20 years of chronic lower back pain had taken its toll on me, and despite the various modes of therapy I had tried …over the years nothing helped me stay pain-free for any significant amount of time. Then I finally found long-lasting pain relief and mobility through the MFR treatments I received from Barbara. I can’t thank her enough for the gift of health she has given me. What she does is amazing, and my life has improved so much as a result. Thanks so much!

You have helped me in all aspects of my being–physically, mentally, and spiritually. This has definitely been a healing process. Thank you!

“I have been suffering from chronic pain for 15 years. After receiving the diagnosis of myofascial pain disorder, chronic migranes and fibromyalgia, I began researching options other than perscription medication to manage the pain. Myofascial Release pain release therapy from Barbara Long has greatly improved the quality of my life. The treatments have reduced the number of migranes and the intensity of my pain significantly. Barbara is very skilled at what she does. I would highly recommend her… END_OF_DOCUMENT_TOKEN_TO_BE_REPLACED

I have been suffering from chronic pain for 15 years.

After having several abdominal surgeries I have so much scar tissue that I would frequently get very sick and need to be hospitalized. Working with the scar tissue over the past 2 years, you have kept me out of the hospital!!!!

Find Our Offices in Hanford and Fresno